So as we await the final proofs, the cover for my next book, Rivers Run, has been put together and I think it looks pretty good.

It is never easy to cast a critical eye on something with your own name on it, and this is intensified when I’ve spent so much time picking through the text.

Hopefully, though, when the book comes out next May, I will be able to read the words with clearer sight and perhaps even enjoy it.

It has been fascinating to write, and has actually given me a sense of perspective that I hadn’t previously considered. I have followed my own footsteps in the narrative, some of which were made more than 35 years ago, and accepting change, rather than lamenting it, has been seriously liberating.

The book is out in May and the details are below – it is available to pre-order from Amazon and all the usual places.

On another note……normally at this time of year I would be marveling at my mastery of mushroom detection – and the cupboard (the mushrooms normally have their own cupboard) would be solid with jars full of goodies.

This autumn however, has been utterly odd on the fungi front. It began with a boom in the August deluges, but then the rain stopped and for 40 days we barely had a drop.

On my last proper foray, I scratched around for a few bits and pieces but nothing worthy of a photo – so instead I shall leave you with these chaps – fly agarics – looking rather handsome even if they were a little bit lonely out there….. 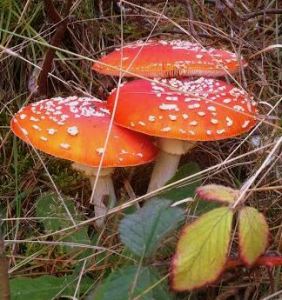