I couldn’t have picked a better summer to spend sitting on my backside staring at a screen. With a book deadline looming I knuckled down and have spent every day of the last six or seven weeks embroiled.

It was worth it – I hope – and the manuscript for Rivers Run is now sitting with the publisher who, with any luck, might just like it.

So I haven’t fished for two months and have had little time to plunder the early mushroom bloom (though in truth, the woods have been so thick with fungi that a 10 minute stroll can half fill a basket).

On the flipside, I haven’t had a chance to feel down about the weather – and that is no bad thing – it really has been pretty grotty… 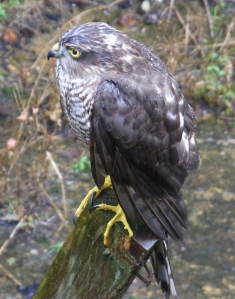 There have still been distractions though. This last ten days or so has seen a gang of half a dozen chiffchaff flitting around the garden – picking flies from the goldenrod.

They have had to keep their wits about them though.

A young sparrowhawk has found our garden to her liking and is absurdly fearless. One damp morning I found her sitting outside the window beside my desk where she stayed for half an hour or so – even allowing me to open the window and take some snaps. 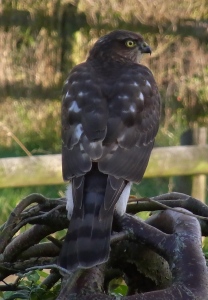 The following day, with the sun shining, she took to a perch just outside the French Windows.

She hasn’t quite managed the art of subtlety, and instead hunts rather like a cat. The sparrows (who have had a prolific year) all tend to hang out in the same bush, and the sprawk, unable to catch them by surprise, goes in on foot – often sitting tight and waiting for an unsuspecting fledgling to sidle up next to her. 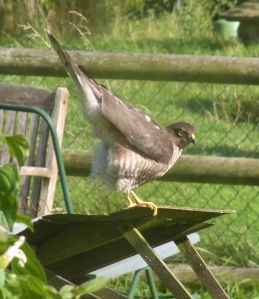 It has obviously worked, to a point. Without too much common sense of their own, the baby sparrows have been easy pickings, though with the thicker ones eaten, the sparrowhawk is going to have to learn the art of subterfuge.

Given her current perch of choice this may take a while……