Nearly three months have passed since I last walked the Common. I’ve been frequently tempted, particularly when I have woken early and the air has been fresh. The prospect of a parachuting tree pipit always stirs me, especially against a backdrop of willow warblers and whitethroat. But then I remember the ticks, and my skin prickles to a shudder of rippled recoil…

It isn’t so much the is it/isn’t it issue of the Lyme Disease and all associated symptoms, but the way my body has begun to respond to the bites. They are always slow to heal, but the few that have come my way this year seem intent on staying indefinitely.  It is though my skin has had enough and can no longer be bothered to mend. It is almost certainly a

psychosomatic response but with some possible justification behind it. And picking up fifty bites every summer (as I have in recent years) from any parasitic little critter is unlikely to pass without some sort of physical reaction.

I could, of course, stick to the paths and wear more sensible clothing, but I might as well volunteer to be the designated driver to a beer festival. If I can’t be comfortable in what I wear and, more pertinently, can’t check that basking spot just in case, then I would rather stay at home.

So I walked today with a sense of compromised awareness and frequent sweeps of knees and calves, and I’m pretty sure I got back into the car without any extra passengers. I picked several dozen ticks from my legs and all but one were the tiny, six-legged larval form. These, it is believed, cannot transmit Lyme, although they are so small that often the first you see of them is after they have already embedded.

And having negated the ticks, I enjoyed the Common, walking a circuit and checking a few familiar spots. I saw two adders, both females and both basking in places where I have previously found them. The cloud cover had lured them out for a look for sunshine, while the humidity will have kept their blood warm and instincts sharp. Neither posed long enough for me to take a snap.

The trees were typically quiet, with plenty of activity but sound restricted to the early autumn pipe of nuthatch and tits. Speckled woods filled the glades, and common blues covered the grassy banks. Lizards scuttled and a spotted flycatcher looped. It was subdued and lazy, and really rather lovely. 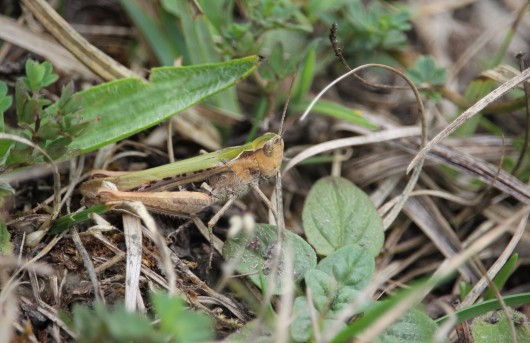