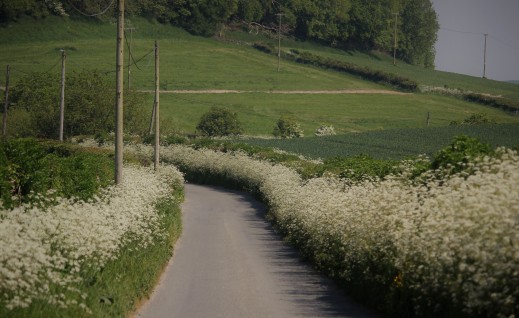 I cannot recall a more stunning display of cow parsley than the one we have enjoyed over these past few weeks. To be honest, it is a flower that I don’t usually pay the attention that it deserves. After the kaleidoscope that builds from snowdrops and ramsons through bluebells, buttercups and red campion, the single blanket of off-white is something of an anti-climax. Yet when allowed to flourish as it has this May, the verges look spectacular.

Spring may have arrived late but it did so with a lovely warm wallop. But as much as the weather patterns of this year have left their mark on the golden plover and lapwing, so something seems to have been going on further south.

Numbers of house martin, sedge warbler and whitethroat seem, nationally, to be well down on recent years. Locally, I have only seen one wheatear on Eggardon Hill this spring, and there are far fewer chiffchaffs chiffchaffing than normal. Conversely, willow warbler numbers are up a touch, and our local martins are back in usual numbers.

Perhaps the extended cold has restricted movement north rather than impact on actual populations. I certainly hope that is the case.

Nightingales are also down this year – and their numbers are already dwindling. Chris went to recce our annual listening point and heard three, with two at another site en route. Our subsequent visit together offered no further birds, whereas four or five years ago there were at least half a dozen at each spot.

These sites are on the western edge of the nightingale’s range, and seem, sadly, to be slipping away to nothing. A thought that added a poignancy to this year’s performance – although the lead singer did offer up a virtuoso performance (as a kestrel hovered above in the fading light).

As ever, there are peaks alongside the troughs. Alongside the willow warblers are a couple of local singing garden warblers, and three pairs of swallow in the village compared to last year’s one.

In the garden, blackbirds, dunnocks, great tits and house sparrows have fledged, while yellowhammers seem to be singing from every hedgerow. There were five or six corn buntings singing within a field or two of the cottage, but they, along with the skylarks, have all but vanished since the sprayers have been out.

And the horse chestnuts (whose candles, like the cow parsley, are looking particularly splendid) are squeaking well each evening. The tawny owlets have been getting vocal – and flapping their wings for the first time. One individual was nosed out by a dog this afternoon – whose owner (Ashley) was sharp to the situation.

We moved the fluff under a yew hedge (beneath the nest tree) where it should fare slightly better away from the whiskers and car tyres. The blackbirds aren’t particularly impressed – but they do get particularly neurotic when tending young of their own. And its safe to say that there isn’t going to be much threat from this little chap for a little while yet…..