It is good to find new places in which to paddle, and I’ve recently managed to dip my toes into completely fresh water. The Telegraph approached my publisher to see if I might be interested in writing a piece on ‘Great River Walks’ – Erm, 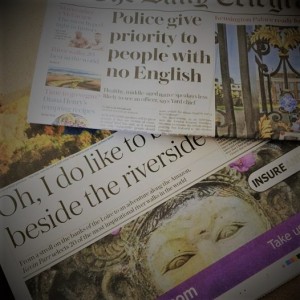 The article proved to be tricky to research, far more convoluted than I had originally anticipated, but after plenty of head-scratching I delivered the copy and it fronted up the Travel Section on 26th August.

I also recently received an email from Keith Betton, vice president of the BTO (British Trust for Ornithology) and a man who has seen more than 7500 species of bird worldwide.

He and Mark Avery have been putting together a book called Behind More Binoculars in which they interview well-known birders (and myself), and Keith was letting me know that the book would be available from early October.

I was interviewed by Mark Avery, on a damp day a year or two back, and I really enjoyed the meeting. Mark, to those who don’t know, is a well known author, blogger and campaigner and former Conservation Director at the RSPB (Royal Society for the Protection of Birds).

We had communicated before – I had approached him while writing a piece on cormorants for CountryFile and he offered me some juicy quotes which I was grateful to use. I was even happier when he named The Twitch as his book of the year, so was really excited to meet him.

With pleasantries passed and interview bagged, we talked a bit about current affairs and the things that made him tick. Illegal raptor persecution was a principle topic, particularly the sensitivities surrounding Driven Grouse Shooting, and Mark had begun a campaign to see the practice banned.

Having rallied unsuccessfully for many years to stop the killing of birds of prey on grouse moors, he believed, rather sadly, that the only way forward would be a total ban. An opinion which had led to a huge amount of online abuse and threats.

What struck me from our conversation was a balance of opinion that was based wholly around the law. I mentioned the forthcoming buzzard control licencing and he was pragmatic, suggesting that although he personally didn’t like or necessarily agree with the scheme, he would respect the fact that it was operating within the law.

He was also surprisingly generous in respect for many who rail against him, appreciating the fears they might have for something they themselves were passionate about. And Mark was surprisingly forgiving of the name calling and late night nastiness that increasingly came his way, suggesting that if people felt the need to resort to personal abuse, then their other arguments must be pretty thin.

It was good to talk fishing too. Much of Mark’s previous dealings with anglers had been negative, as he argued a case from an opposite stance, so it was good to offer a different perspective and realise just how much common ground can actually be found. Defending angling is never easy (even to myself) but it can help to hold your hands up to any shortcomings and look to compromise rather than dig your heels in on every issue.

There are, of course, plenty of anglers without an inclination to look beyond the black and white, but it is the same in every walk of life. And very much the case within the shooting world. There are a huge amount of gamekeepers and land managers with a incredible depth of understanding of the natural world. Unfortunately, it is those few who look to eradicate rather than control that tarnish the reputation for all.

We have created a world where management is essential to some degree, but the loudest voices tend to come from those whose opinions are extreme. And too often ‘evidence’ is only respected if it reflects those specific opinions, and it is all too easy to close ranks and hear only what we want to hear, rather than share the knowledge that can be of benefit to all. Nobody is perfect, but the only way we can change is to accept our failings.

Behind More Binoculars by Keith Betton and Mark Avery is out on 9th October and includes interviews from the likes of Bill Oddie, Roy Dennis, Tony Juniper and some bloke called Parr.

The publisher, Palagic Publishing, are offering 30% off the list price for pre-orders. The book can be found here, and the discount code is BMB30.