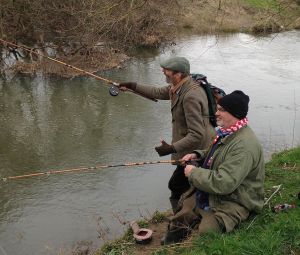 There was a low turnout for the annual Golden Scale Club Final Day Fish-in this year – mainly because no-one knew about it.

Of course, with the lack of competition, the fish fed well – and although the final day is principally an opportunity to empty the dregs from bait-tins and compare cakes, catches are often spectacular..

The three of us fishing below the bridge pool (Chris, Garrett and myself) all set up float rods in the hope of catching whatever came along – and caught fish immediately.

Garrett and Chris found a shoal of ravenous dace while I found a pocket of roach right at the end of my swim. It was a bite a cast, with some lovely fish being caught.

Then I caught a gudgeon, and the mood suddenly changed. 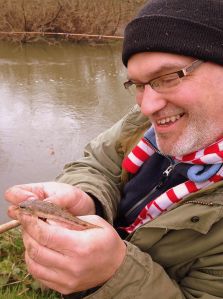 No-one had been counting up until now, but gudgeon are another matter. Chris caught one of his own, and then a second – he was cock-a-hoop and suddenly numbers mattered.

We still caught roach, dace and small chub, but only the gudgeon drew a cheer. It was nip and tuck and my swim (the hotspot) was getting crowded. Garrett (Fallon – founder and editor of Fallon’s Angler) got in on the action, but Chris was the man to beat.

It came right down to the wire, and in the gathering gloom I had to take my float off for the final few casts. But having just landed the best roach of the day (well over a pound) I had a rattling bite that could only be a gudgeon.

It was my fifth, drawing me level with Chris. Honours even, though as we drained the last of the tea from another season of bankside boilings, numbers ceased to matter once more. It had been the perfect final day, and we bathed briefly in the warm glow of Venus before putting the rods away for another season.