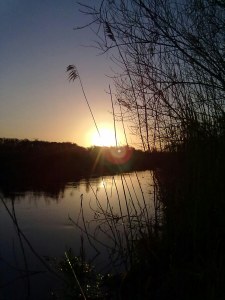 I went perch fishing yesterday and conditions were ideal. Mild, dank and just a soft breeze that tickled a steady fall of leaves from the beeches.

I had planned to fish a new venue but having arrived at my friend Chris’ house for a 0630 cup of tea, we made a late call to go elsewhere.

We would head to a pond where the perch were prolific, and though their numbers have dwindled in recent seasons, there was every reason to expect a dozen with a couple of good size fish among them.

I didn’t notice at the time, but as we pulled up on the bank my mind was not quite in gear. I normally treat a day on the bank as a new experience, no matter how well I know the water. Subtle changes in conditions can send fish to fresh lies and as such I try to feel where they might be.

This morning though, I was almost nonchalant. I didn’t stop to breathe and consider, and instead just sloped off to a favourite old swim and expected to catch immediately. Nothing happened.

No problem, I thought, I’ll simply catch elsewhere. Except I didn’t, and not even a couple of banker swims would produce the slightest dip of a float. It was late in the day when I realised that I was truly disconnected, and though I reacted to a late sense of purpose, my day ended fishless.

Chris caught plenty, and urged me to cast beside him, but I was okay – content that at least I had learned to not take too much for granted.

And the fish and chips on the way home were extraordinary…