And the grass snakes have finally emerged, too!

They are cold at this time of year and docile as a result. Grass snakes are not found much further north than Hadrian’s Wall and after the cold of the past winter and early spring they have hibernated a full month longer here than last year. 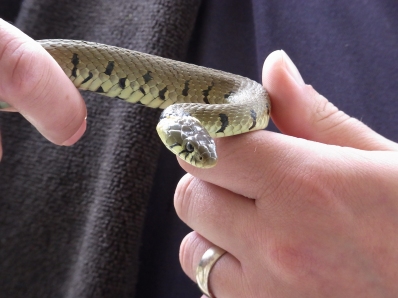 It took a few snaps to catch him with his tongue out…..

I popped him back to the place I found him and another, smaller snake had nicked his basking spot.

I will try to resist picking them up again – but will make a grab for the big resident female if I get a chance. She is a good sized snake and I would love to measure her…..