I had a couple of hours free yesterday afternoon, and, thanks to Ben (my brother-in-law), I had almost a pint of maggots in my bait tub. With relatively clear skies and an air temperature reluctant to raise itself above zero, grayling were the obvious fish to chase and I nipped down to the River 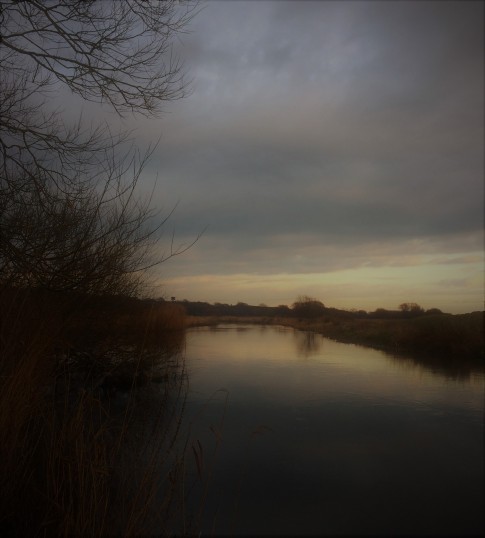 Every winter I promise myself I will spend more time fishing the Frome, and every winter I find myself distracted by other fins swimming in other places.

I have been slightly deterred by the crowds. Dorchester Angling offer plenty of water but on my first trip I found the banks surprisingly busy.

I have been fortunate in many ways to have been able to enjoy plenty of solitude in recent years. I tend to fish backwaters on days when the weather might keep sensible anglers indoors – it isn’t that I am unsociable, I just enjoy my own space.

I found a quiet little pool yesterday, where the current deflected across the river forming a long, deep crease which looked as though it had to hold fish. And so it proved, with a brace and a half of grayling (all well over a pound) coming over the next couple of hours.

It was far from frantic, but every time I contemplated a move the float would dip once more. I did eventually move, but out of curiosity rather than a need for more fish. Further downstream I sat and laid down my rod for a moment to breathe in the view.

The sky was bruising as the thin cloud smudged the sinking sun and the Frome valley became awash with plum. Half an hour drifted by without another cast, although I remained transfixed by the river. The surface had become glassy in the fading light, emphasising every riffle and twist. There was no wind, just the water moving exactly as the Frome had formed it. I felt no urge to blot the perfection with the red tip of a float, so I savoured the moment once more before heading for home.

Too often I forget to actually stop. I will be absorbing and interacting but purpose can dilute immersion. Yesterday, as much as I enjoyed catching those grayling, I benefitted most from those last minutes spent watching the river.

Last week I had a similar experience while walking at Maiden Castle. I had dropped my  parents off at the hospital and headed out of town rather than fight for a parking space.

As I strolled, so a movement in the brambles caught my eye and I inched over to investigate. It was a goldcrest which soon flitted deep into cover and out of sight, but as I 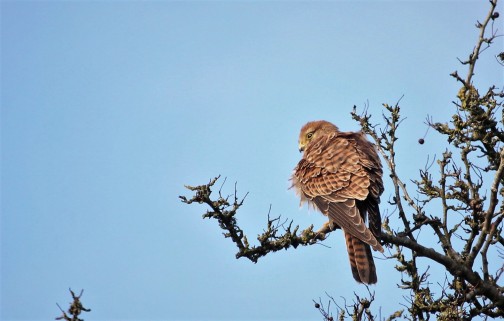 turned, I noticed a bird hunched on the branch of a hawthorn about fifty yards away.

Its feathers were ruffled against the cold of the breeze but the form was unmistakeable. 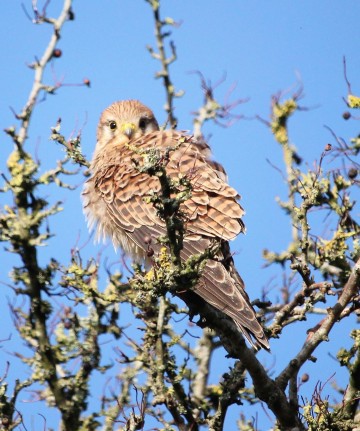 I would take kestrels for granted as a child. They were far and away the most common raptor where I grew-up among the well-farmed folds of mid-Hampshire. I saw them almost daily, and they were widespread and common. Their recent demise has meant I no longer look upon them so briefly or with an air of dismissive disinterest.

This bird was a youngster and seemed utterly unconcerned by my presence. I was able to walk slowly to within ten yards of it, and though it stared hard a couple of times, it showed no fear or intention to take flight.

And so I watched.

Absorbed by the moment. 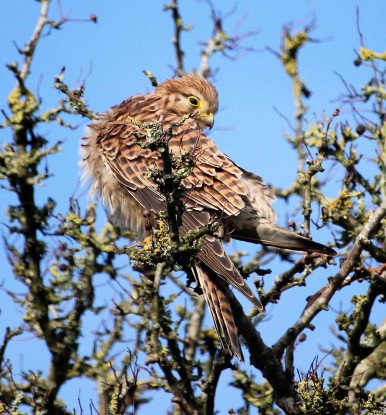 It preened, watched, roused, and eventually after ten minutes or so, dropped off the branch and drifted over my right shoulder down towards the base of the earthworks.

It’s attention seemed to have been drawn by a second bird (a sibling, perhaps?) with which it briefly danced before drifting off and out of sight.

I smiled to myself and remembered to breathe agan.